Binary number system is used by the digital computers and digital electronic devices. The binary (the prefix bi meaning two) number system uses only the two values: 0 and 1.  The digit 0 is represented by LOW voltage and digit 1 is represented by HIGH voltage. This matches the capabilities of the transistor perfectly, as the transistor can also have only two states or values. The bonding of these two states allows the computer to use the binary number system. The computer stores a single binary numeral (either a one or a zero) in a single transistor. In fact, the word bit in computer language is a short form of binary digit. Each transistor holds a single electrical charge that is either positive or non-positive, which in turn represents a 1 or a 0.

When you say a binary number, pronounce each digit (example, the binary number “101″ is spoken as “one zero one”, or sometimes “one-oh-one”). This way people don’t get confused with the decimal number.

A bit is a binary digit, taking a value of either 0 or 1. For example, the number 10010111 is 8 bits long. Binary digits are a basic unit of information storage and communication in digital computing and digital information theory.

Eight bits are grouped together to form what is called a byte. A byte can store smaller integer numbers or a single character. The eight bits of a byte can create 255 different values in the binary number system.

A megabyte is a unit of information or computer storage equal to 1,048,576 bytes ie 1024 kilobytes. It is commonly abbreviated as MB.

A gigabyte is a unit of information or computer storage equal to 1024 megabytes. It is commonly abbreviated as GB. 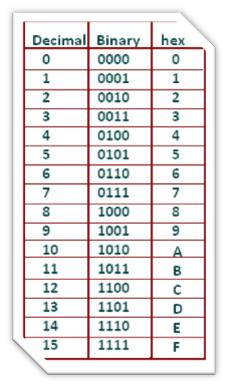 Counting in Binary is similar to as other number system. As in Decimal we start counting from 0 to 9 and after 9 we again start with 10 and so on after 99,999 and continue, in binary number system we use combination of only two bits 0 and 1. The first 15 number in number system are counted in binary as shown in table picture.

When the symbols for the first digit are exhausted, the next-higher digit (to the left) is incremented, and counting starts over at 0. In decimal, counting proceeds like so:

Adding two “1″ digits produces a digit “0″, while 1 will have to be added to the next column as a carry.

Subtracting a “1″ digit from a “0″ digit produces the digit “1″, while 1 will have to be subtracted from the next column. This is known as borrowing. The principle is the same as for carrying. When the result of a subtraction is less than 0, the least possible value of a digit, the procedure is to “borrow” the deficit divided by the radix (that is, 10/10) from the left, subtracting it from the next positional value.

Apart from this subtraction method digital computer uses complement methods for subtraction. We will definitely cover more about Complements in coming articles.

One Response to "Binary Number System"